Of this total, approximately 10% are in free float, 31% are common and 69% preferred shares.

The Government of the State of Sergipe is the majority shareholder of Banese, with approximately 90% of the shares. 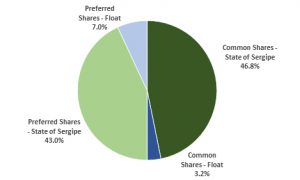 Since April 2008, the Bylaws of the Banco do Estado de Sergipe S.A. contain a Tag-Along right for minority shareholders in case of a material change in the bank’s shareholding structure. Beginning in 2017, this condition was acknowledged by the market entities, and the shares became part of the composition of the B3 “ITAG” index.